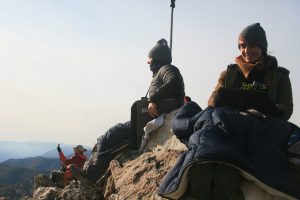 “They try to attack the decoys because owls are big nest predators,” Eberle said. “It is the instinct of birds to defend their chicks. HawkWatch International collects data on raptor migration at seven sites in the western United States. They started 35 years ago and have included data from the Chelan Ridge site for the past 22 years. Biologists return to the exact same rock on Chelan Ridge each year from September through October to collect data from a consistent location and date range, Barry said.

This year, five biologists are collecting data at the Chelan Ridge HawkWatch site. Eberle, Barry and McManus watch the sky from the gazebo, and Zoe Bonerbo and team leader Nicole Richardson run the banding station.

A trailhead sign indicates the trailhead to the viewing area. The 0.75 mile trail climbs gently north through the shrub steppe with stunning views of the surrounding ridges and Lake Chelan to the west. Interpretive panels detail the flora and wildlife habitat along the trail. This HawkWatch International site is a partnership with the Okanogan-Wenatchee National Forest and other groups, including the Community Foundation of North Central Washington, the North Central Washington Audubon Society, and the Kittitas Audubon Society.

Biologists record the weather hourly from their perch on the rocky spine, noting barometric pressure, temperature, wind speed and direction. That day, Eberle announced readings while McManus recorded the weather data. Falcons migrate when wind conditions are most favorable, moving on wind currents blowing in the direction intended to save energy, McManus said. One morning when the winds were blowing north, the team saw only two birds per hour. The winds changed later in the afternoon to a northerly wind, flowing in a southerly direction. The team said they saw nine raptors per hour as the birds took advantage of the favorable wind direction.

Fall migration is a great opportunity to observe the overall population size and health of raptors. Long-term data collected at HawkWatch sites helps identify trends over time and is used by wildlife managers to inform conservation plans.

When a raptor is seen, the three biologists confirm the species and record the count. This data is used to track group trends and migration figures. To date, red-tailed hawks and pointed-shin hawks are the most commonly seen birds, followed by Cooper’s hawk, harrier, turkey vultures, accipiter species, and swivels. .

Birds have different destinations. Species that live most northerly, like rough-legged hawks, only travel south to California, but Swainson’s hawk travels from Canada to Argentina. “It’s crazy. They go this far and stay there for a little while – then come back,” McManus said.

Barry explained that more detailed data is being collected at the banding station on the age, health, body composition and crop content of migrating raptors. Daily counts, hourly data and weather conditions specific to the Chelan Ridge site can be viewed at https://hawkwatch.org/chelan.

Not all of the raptors seen from Chelan Ridge migrate south. McManus noted that sharpies and kestrels are year round residents who can fly to protect their territory. Researchers are watching the falcon’s behavior closely to determine if the bird is really migrating. To be classified as a migratory bird, the bird must be heading south, flying quickly and in a straight line.

Migratory hawks roost at night in parks and urban areas. They are not active in bad weather and can try to make up for lost time the day after a thunderstorm. In fact, Chelan Ridge biologists recorded the highest numbers of migrating hawks the day after a heavy rain. On September 11, 57 migratory raptors of 12 different species were counted. According to https://hawkwatch.org/chelan, “counts generally vary between 2,000 and 3,000 migrants of up to 17 species per season”.

Research operations were suspended in 2020 due to COVID-19 precautions at five sites, including Chelan Ridge. The teams live and work closely together in remote wilderness areas six days a week, up to nine hours a day. The health risk from COVID-19 infection was too great before a vaccine was available.

“The organization lost a year of data,” Barry said, and McManus said a cut in funding for nonprofits that also saw a drop in donations and resources.

Now that COVID-19 vaccines are widely available, all seven sites are open to researchers and visitors. Crews must be vaccinated against COVID-19. Guidelines for visitors are posted on HawkWatch.org at https://hawkwatch.org/blog/item/1256-migration-is-on. Visitors are advised to consider their own immunization status and not to endanger unvaccinated children, as the site welcomes groups of young student visitors.

On September 30, HawkWatch International is launching “35 Years It Counts” Celebration Month, a virtual five-week program. The series includes lectures and virtual site tours, all enjoyed from the comfort of home. Register for events at https://hawkwatch.org/.